No one can deny the entertainment values of a good scary story, whether it be a novel by Stephen King or a low-budget slasher movie. Irish folklore may have a lot more in common with stereotypical horror movies than you would think.

In the art of storytelling, there are many ways to create and sustain this feeling of angst and the desired thrill that comes with it, and the appeal for it is nothing new. In the immensity of traditional Irish folklore, there are many stories with the purpose of frightening their audience, and taking the opportunity to warn them from a certain behavior by creating a new and mysterious danger. All evil serves a purpose, and in the same way as the Big Bad Wolf prevents children from wandering in the woods, there can be a greater intention behind some of these Irish tales.

Oral transmission must have played a major role in the creation of a fearful ambiance. The performative aspect and theatrics of storytelling can emphasize the feeling of suspense accordingly.

As for the plot itself, the bulk of all documented folk tales from Ireland that have survived and are now accessible to us shows similar patterns and recurring motifs. Calendar customs are a very important element in Irish tradition, and according to beliefs, the boundaries between our realm and the fairy realm were thinner on the nights of Samhain and Bealtaine (two of the most important annual festivities, on the 31st of October and 1st of May respectively). Many tales recount events during those two special nights, and it was preconized not to leave the house on those occasions. These can be identified as typically Irish, and sometimes stories can be inherent to a specific biome or even smaller area depending on its inhabiting community.

Irish tales are very effective in their role of engendering fear thanks to direct references to real names and places. In fact, every single story in the Irish narrative tradition is directly linked to a specific location, truly increasing its credibility. Inspiration finds its source in the observable nature, and this intertwining of fiction and reality came to a point where Irish toponyms were chosen according to local legends, shaping Ireland’s landscape as a highly mystical island. Stories may inspire place-names which stimulate imagination and encourage further tales to be told. Once this is established, it is very easy to nurture folklore as it has become part of daily life, though English-translated names do not render this intimate relationship between folklore and toponymy.

On the other hand, Irish tales also know how to be elusive and play with your mind using what’s unknown to weave an ambiance of dread. After all, your own mind is your worst enemy when it comes to fear. In cinema especially, the threatening being is sometimes less scary when seen clearly than when they were moving from the shadows, spotted in the background … (Alien, 1979) (The Babadook, 2013). There are many examples of Irish tales’ use of ignorance as a tool for horror, the best being arguably the entire concept of the sídhe – this magical and highly dangerous underground realm parallel to ours which is inhabited by the fairies. The sídhe can supposedly be accessed via certain entrance passages (caves, burrows…) identified by locals, and instances of protagonists visiting or being kidnapped, lured into the fairy realm in Irish tales are plenty. It is appropriate to add that fairies in Irish folklore are not the benevolent young ladies depicted in mainstream media. They are a fearsome kin with unclear goals and supernatural abilities working in the shadows and often against human plans. Another recurrent type of character from the sídhe in Irish folk tales is the supernatural family member, which adds this dimension of untrustworthy loved ones and threats coming from within the most intimate of social circles - the household itself (see more below).

Superstition is a strong ally to fear, and if a story can scare you even though you do not believe in its veracity, just imagine the impact of such tales of horror in a community which strongly believes in their truthfulness. Supernatural beings are oh-so-often featured in the horror genre : if not your regular demon, poltergeist or werewolf, names like Pennywise, Dracula or Slender Man may ring a bell. As for Irish folklore, it offers a large choice of magical creatures. Some are benevolent and others are malevolent.

The first and probably most notorious example is the banshee, literally “woman of the sídhe”. Banshee sightings have been registered all across Ireland and believers of their existence are still numerous today compared to most other superstitions. According to tradition, banshees are ghastly women renowned for their screech which acts as an omen of death. The banshee’s role is very close to the tradition of keening – women hired to cry plaintively at funerals to express grief. The difference lies in the moment of their appearance: before or after death. Family members (wives, husbands or children) can become another source of fear in Irish folk tales, especially when their true identity is doubted. Changelings, those malicious and despicable entities from the fairy realm, are depicted all across Europe and Ireland is no exception. In Irish traditions, the creatures come from the sídhe and have been swapped with human babies by the fairyfolk. One can recognize a changeling by their intelligence, their behavior and abilities or physical traits which may resemble those of a human baby yet are somehow off-putting. 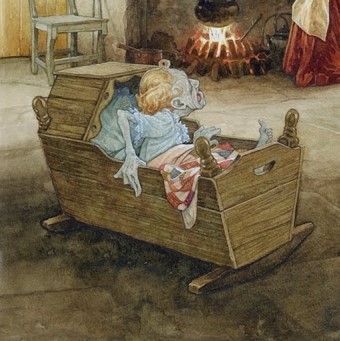 Has this belief ever been used to cover infanticide?

you might ask. Well, very probably, yes - although there is a lack of contemporary occurrences (thankfully so). On a similar note, the next example is which of supernatural partners – mostly wives – or even neighbors (mostly female neighbors as well). These revolve around similar themes to changelings and proved to have had some terrible effects on real families. Stories about these magical beings are plenty as well, with a praised protagonist having been deceived and discovering the truth about their loved one or neighbor. Then again this idea of living among dangerous people has been used and re-used in horror, think of Stephen King and The Shining (1977) or even John W. Campbell’s Who goes there? (1938) which inspired the notorious movie “The Thing” in 1982. In the case of the fairy wife, the best way to describe the motif might be by learning about Bridget Cleary, whose murder gained notoriety due to its nature (this example is in no way an attempt to romanticize her death). You are invited to read this article to grasp the concept, which bears a resemblance to the horror of exorcism practices – both in fiction and real reports.

As for neighbors, one of the most common tale is which of the hare-woman. Stories about women using shape-shifting abilities to transform into most frequently a hare to approach the main protagonist’s cattle and suck the milk out of the cows’ udders. Often times the protagonist is a male farmer who injures the hare and finds his neighbor bearing the same wound. This story is not necessary fearsome in most instances but rather unnerving, yet it still finds its place here in this argument as it participates in the creation of this lore surrounding the fairies – their tendencies to steal, conceal and mislead humans, and the depiction of Ireland’s nature as an hostile and dangerous environment.

To conclude, and maybe most importantly, if you ever feel like craving both Irishness and a good shiver down your spine, you can always watch the 1993 movie Leprechaun, but I must warn you : it will probably be disappointing (and somehow the 2018 sequel managed to be worse).