The Viking heritage of the Isle of Man

During the Viking Age, Scandinavian pirates left their homeland to expand and build settlements all over Europe. They went to present-day Newfoundland, Continental Europe and even went as far as Turkey. We know of these travels thanks to literary and archaeological remains (Norse Sagas, legal documents, runic inscriptions, burials etc.) The most important remains left behind by the Norse settlers of the Isle of Man are the runic inscriptions on Manx crosses (sometimes called Manx runestones) and the linguistic and political heritage still apparent today. These inscriptions started to appear on Christian crosses after the raid of St Patrick’s Isle in 789, accompanying the already present oghamic and Latin inscriptions dating back to the Irish rule during the early 5th century. This article’s main aim is to make the history of the Isle of Man and of Medieval Scandinavia more accessible to people outside of academia and to highlight the result of the fusion of societies when it is done with as much respect and as little destruction as possible.

Based on the lapidary inscriptions, we know that settlers during the 4th century mastered both Goidelic and Brythonic languages but that during the 5th century Irish monks and missionaries came to the island and their Goidelic language predominated. [1] While the rest of Europe was under Roman rule the Isle of Man converted to Christianity with the help of disciples of Saint Patrick and Columba and they built churches, much like the ones in Ireland, Scotland, Wales and Cornwall. [2] During the 6th century the people of Man started raising lapidary monuments in the form of crosses, these crosses were proof of the progression of Christianity within the island and how it was easily accepted by the people living there. These crosses were inscribed with both oghamic and Latin inscriptions, thus highlighting the strategic hold these Irish settlers had on the Isle of Man during that period. [3] The Irish ruled on the Isle of Man religiously and culturally until the ninth century, the most important edifice of this time is the Maughold monastery dating back to the seventh century. [4] Maughold became the main place of worship after the destruction of Inis-Patrick during the Viking invasion. [5]

The Norsemen arrived on St Patrick’s Isle just off the west coast of the Isle of Man in 789. [6] The island, which was once Irish, was now under the rule of the Viking chefs of Dublin and, after 880, they directly answered to the King of Norway. During the 11th century Godred Crovan, ruler of the Kingdom of Dublin and of the Southern Isles, founded the basis of the Tynwald - one of the earliest and the longest lasting parliament in the world, inspired by the Icelandic Þing. He also ordered the construction of a cathedral in honour of Saint Patrick. His son Olaf the First invited the Cistercian order of Furness to establish a monastery in Rushen, which later became the Diocese of Sodor and Man. [7] Crovan established more parishes and from that point onward the bishop of the Kingdom of the Isles answered directly to the Archbishop of Trondheim in Norway. [8] Evidence of a Danish and a Norwegian rule can be found in the Chronicon Manniae, the Irish Annals and in the Norse Sagas. These texts confirm a Scandinavian dominion of nearly four hundred years. [9] In addition to becoming devout Christians, the Norse developed a trade on the Isle of Man, making the ports of Ramsey, Peel and Castletown vital gateways for commerce between Ireland, Norway, France and Spain. The link between the Norse and the Isle of Man was so strong that other Celtic countries called the Manx “foreign Gaels”. In 1263 Haakon IV, King of Norway, lost the Hebrides to Alexander the Third of Scotland making Alexander the only successor to the Isle of Man when Magnús Óláfsson, King of Mann and the Isles died in 1265. Magnús’ death marked the end of the Norse rule on Man and made room for the Scottish rule. [10]

The Norsemen did not impose neither their culture, nor their religion on the Isle of Man. These invaders were naturalised, Christianised and even Gaelicised. The language they spoke later became Manx. [11]

In Norse mythology the runes are used for divination and are, to this day, still used as divinatory tools in modern paganism. Within the manuscript of the Poetic Edda, there is a poem which tells us of the sacrifice of Odinn - how he was hung from a tree for 9 nights and 9 days and how he lost his eye for wisdom.

I know that I hung on a windy tree nine long nights, wounded with a spear, dedicated to Odin, myself to myself, on that tree of which no man knows from where its roots run.

The runic alphabet found its origins in the second century in Scandinavia, it was likely derived from the Roman alphabet and that is why certain runes such as ᛒ and ᚱ look so familiar. Runes have appeared all over Europe, whether it be carved in stone, wood, metal or even bone. The runic alphabet is called fuþark, named after the first six letters.

The runic alphabet has changed so much that we distinguish three different types, the older fuþark, the younger fuþark and medieval runes. The importance of runic inscriptions is not only to mark the presence of, mainly, Vikings but also to inform us of who raised the stone and why. The majority of runestones are memorials, they tell us: Who raised the stone (Faðir) for whom (Ǫzur) their relationship (brothers) where that person died (in the North) and how (Viking expedition). [13]

Faðir carved these runes for Ozur, his brother, who died in the North during a Viking expedition. [14]

There is an earlier stanza in the Hávamál that talks about the importance of erecting stones in honour of those we have lost, making it a tradition.

Better to have a son, though born late after the father has passed away. Stones seldom stand by the roads unless raised by kin for kin. [15]

It is important here to distinguish the difference between the two types of runic inscriptions we will encounter here. The people of Man raised “crosses” whereas in Scandinavia they raised “stones”. Though the messages found on the Scandinavian stones are predominantly Christian messages, the tradition of erecting crosses predates the Norse inscriptions on said crosses just as much as the tradition of erecting stones predate the arrival of Christianity in Scandinavia. [16] During the Viking Age the Isle of Man had an important runic activity. Over thirty stones have been found there, making the Isle of Man the country with the most runic inscriptions after the Scandinavian countries: Sweden, Norway and Denmark. [17] 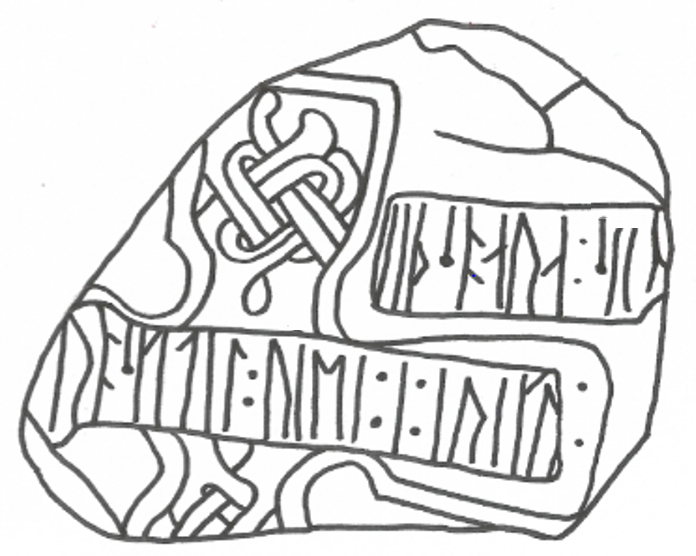 Hrosketill betrayed the faith of his sworn confederate. [18]

Some crosses include personal names, place names and scenes from Christian and Norse mythology. [19] This proves the presence of mythological and legendary traditions within Manx culture, the stories were put on the crosses to ensure that they would be told and retold over the years and beyond generations. These crosses depict the adventure of Sigurd slaying the dragon and Odin being devoured by Fenrir at Ragnarök but also of the angels and episodes such as the Crucifixion of Christ binding both beliefs into one. [20] Having Celtic names in a, normally, Norse scripture has led to a linguistic evolution. This caused the runic inscriptions to lose their Norse inflectional system and change its word order. [21] When the runes are on the face of the cross, in a parallel design that means that they are typically Manx. No runestones in Norway use that method, this method is much closer to the memorial rites of the Irish Sea, it is a tradition unique to Celtic nations. [22] These crosses, though they were erected by converted Norse settlers on the Isle of Man, are inscribed in Old Norse and not the variant of a Goidelic language that would have been spoken on the island during that period. No matter whether the names carved were Celtic, the language surrounding it would be Norse. It is indeed difficult to transcribe foreign names into Old Norse due to its precise declension system. This would make us believe that Old Norse had certain notoriety on the island and that even after it’s later disappearance. [23] The Old Norse on the crosses of Man diverges from the classical Old Norse found in Norway during the Viking Age, some case-endings are lost at times (for example the nominative -r ending). This is not unheard of in hybrid communities. Not to mention that the craftsmanship was

irreproachable, this could not have been an error due to careless carving. [24] There was a similar situation in Ireland where Norse and Celtic people lived side by side and kept their language with inevitable crossovers. [25] Today the crosses are kept inside the churches and are still very much cherished by the locals. [26]

The cultural richness of these stones and their inscriptions is unique to the Isle of Man, and are some of the many reasons that make the island well worth studying and exploring. [27]

Traces of the Norse rule of Man can be found when studying toponymy and linguistics. Place-names such as Jurby, Kirk Michael, Foxdale and Snaefell are all Nordic, those ending in -by and -wick all are too. Due to the innovations brought to the Isle of Man by Norse settlers, most of the vocabulary in relation to navigation and commerce in Manx is of Norse origin. [28] This is a common occurrence in bilingual areas where there is a lack of vocabulary in certain topics, for example the Sami population of Northern Scandinavia who have a wide range of vocabulary for everything nature orientated but very little when it comes to modern technology. In homage to these Norse settlers, the coat of arms of the Isle of Man is a raven partnered with a peregrine falcon. Ravens were thought to be compasses for Celtic and Norse voyagers, just like the mythological ravens Huginn and Muninn who would advise Odinn. We can find more Norse iconography in the flag of the Tynwald – a baby blue background with a Norse galley on it. [29]

Though the arrival of the Norsemen on the Isle of Man was very hostile, these settlers learned to coexist with the already present Celtic inhabitants. The curiosity of these new rulers led to their conversion, yet they had no desire to abandon their Pagan beliefs. These people became devout Christians following the already ongoing conversion of Europe whilst keeping the myths and legends of the old country alive and well. They kept their tongue and brought innovation to the Isle of Man which it had not had with the Irish Monks, at least not when it came to trade and craftsmanship. While all rulers brought something new to the island, the Norse are those who truly made an impact on modern day life when it comes to institutions and political values – making Man a little more Scandinavian than the rest of the Celtic lands. The remains of this life are still present today, making the common sentiment of identity not entirely Celtic, not entirely Norse but absolutely Manx. Separate from its Goidelic brethren Ireland and Scotland, the Isle of Man has a unique history that is always worth studying.

All illustrations are my own.

GARDEŁA, LESZEK and LARRINGTON, Viking Myths and Rituals on the Isle of Man, University of Nottingham Department of Health Care of the Elderly, 2014.