The stunning landscapes of Ireland are best known to be the hiding place of the fairy creatures that inhabit the island in traditional folklore. But, side by side with fairies and Gods, also great heroes walked once the legendary Irish planes. The green hills and mountains were once the perfect setting of the Fiann Cycle, one of the most successful Irish epic stories. If nowadays what can be observed is in most cases just the bare summit of a hill or an abandoned and overgrown cairn, way more hides in the history of Irish landscape.

The stunning landscapes of Ireland are best known to be the hiding place of the fairy creatures that inhabit the island in traditional folklore. But, side by side with fairies and Gods, also great heroes walked once the legendary Irish planes. The green hills and mountains were once the perfect setting of the Fiann Cycle, one of the most successful Irish epic stories. If nowadays what can be observed is in most cases just the bare summit of a hill or an abandoned and overgrown cairn, way more hides in the history of Irish landscape.

A body of knowledge is gathered in the Ireland’s traditional tales that help us to partially reconstruct the medieval reality. Geomythology studies are nowadays used to deepen our understanding of the relationship between ancient communities and significant land formations that lead to the creation of specific myths aimed to explain, with a pre-scientific mindset, the landscape, and it’s particular geological forms. These attempts to approach easily observable landscape characteristics and a developing body of traditional myths are common to many ancient societies through the world. The wide Irish corpus of literary tradition is a fundamental source for the understanding of the inhabitants’ perception of Ireland territory in medieval times. Many Irish tales are closely linked to the natural conformations of territory and landmarks that worked as orientation points Irish people used to navigate in real life, as in imaginary oral tales. The presence of ancient monuments as cairn and ritual enclosures shows an early and unending recognition of specific places as in many tales from around the world the hero is first handily responsible for marking the landscape, creating lakes, mountains or founding cities. Origin legends are a type of myth that may be susceptible to archaeological assessment. A known example of Finn’s exploits is connected with the creation of the Isle of Man. During his fight against a giant, the hero is said to have lifted a huge sod of heart from and thrown it out of the Ulster’s shore into the Irish Sea, creating the island.

The cross-disciplinary study of toponymy and traditional tales can open a window onto Ireland medieval landforms, and at the same time shine a light on contemporary onomastic.

The Fiann Cycle represents one of the best known national epics of the Gaelic-speaking area that, differently from other literary corpuses, doesn’t incorporate a single consistent cycle of poems but refers to all the written and oral material composed in the centuries that never received a definite, final form. The so called Fíanaigecht consists in a corpus of literary compositions around the common theme of the heroic deeds of Finn mac Cumaill and his warriors. References to the Fiann’s exploits can be found in lays, topographical poems and folklore narrative from both Ireland and Scotland, written down from the 7th century onward. The Fiann was a warrior band constituted by the young noble members of a community, not old enough to inherit wealth and land and living outside of society. The warriors used to roam Ireland, pursuing glory, fighting hostile magical beings, defending the island from invaders and hunting on the hills [1]. 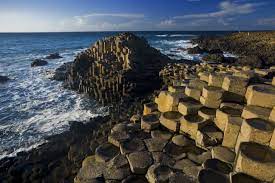 Despite these tales are solely related with legendary events, and have little to share with the historical reality of the period, the natural places where the Fiann’s adventures take place show shared traits, particularly related to the figure of Finn himself. Their legendary exploits were closely associated with wilderness and boundary areas and localized where contrasting rock types formations are still detectable nowadays. The famous Giant Causeway on the Northern Ireland’s coast is told to be the results of Finn’s fight against a Scottish giant claiming rule on the island. He builds a stone bridge over the sea that get destroyed and boulders shuttered around by the fleeing giant. 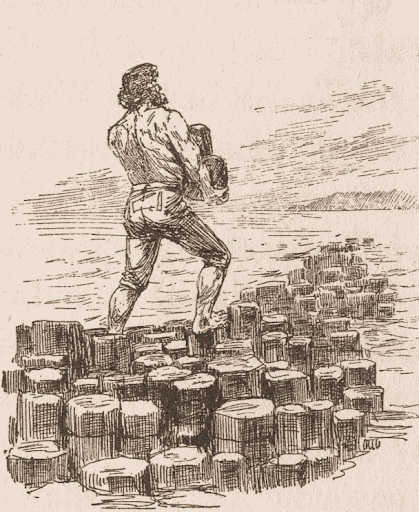 The warriors’ leader name recurs in different place names in Europe and Asia Minor, philologically refers to something bright, fair and enlightened, and it is no surprise that the characteristics of traits of Finn mac Cumaill are supernatural knowledge and superiority over other heroes. Named by compound forms of Finn name, such places are associated with recurrent geological features that qualify them as natural markers. Formoyl (Formaoil) and Seefin (Suidhe Fhinn) are the commonest place names related to the Legendary/traditional tales, the first one highlighting a very bare area, while the second names a hill or low mountain easily accessible and presenting a cairn or an unusual rock formation on its summit. Because of their particular natural forms, such were often used as territorial boundaries and recorded in written sources, as the Seefin Mountain in County Limerick and Finn’s Seat on the River Boyne. The diffusion of Bronze Age cairns as burial places wasn’t overlooked in medieval times. Because of their particularity and they way they stood up in the landscape, cairns and mounds were employed as well as reference points of territorial boundaries as medieval graves. In Irish literature they were often believed to be entrances to the Otherworld and are named in both two most important Fiann related texts, the 12th century Colloquy of the ancient and Finn’s boyhood deeds. In this last one, the hero enters the Otherworld through the mound on top of Croghan Hill (Co. Offaly) to take revenge of Cethern’s death. Crowned by a cairn and formed by rock types contrasting with the surroundings, Croghan Hill was a medieval landmark and naturally paired with Finn’s adventurous deeds [2]. 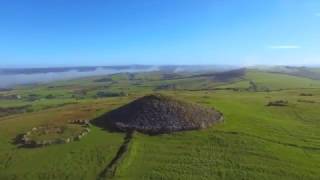 These boundary places are easily recognisable by the presence of contrasting rock types and different geological contact zones. But the characteristics of Fiann’s place-names are not only found in geological features. As the tales related to these legendary warriors are commonly settled in wild areas and their magical traits strictly connected with this ambient, Irish forests were as well identified with Finn’s adventures. Perfect hunting grounds, lushing forests were also necessary for the natural and mineral resources they provided and the perfect setting for an otherworldly adventure. Their recurrence in literary texts is also connected to their historically proven importance and use as hunting grounds where local nobles and their hunting party proved their braveness and valour. The forests’ importance is still visible in the surviving in Ireland of deer parks around more recent country estates, in a few cases in correspondence of historic hunting areas and exploited lands.

The tendency to see literature and myth as “false” data is widely shared in archaeology studies, where instead they can offer an insight into historical monuments and traditions. On the other hand, archaeology can offer tangible data of settlement change or continuity to which legends of migration from Celtic-speaking nations can be compared and contrasted [3]. Many areas in Ireland are being surveyed to create a more accurate map of the Fiann’s places. This process is made difficult by the deep changes in the Irish territory and in the land exploitation techniques through the centuries. Thanks to the combined use of archaeology and geomythology it is nevertheless possible to find ancient landmarks that still impose themselves on the Irish landscape. 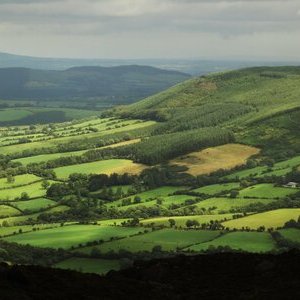 illustration View on the hills of Ireland